We’ve seen leaks before, but according to our sources, this one is legit. Pics have been released by EvLeaks, who has a more positive than not reputation for good leaks, showing the Motorola X Phone. Or, we could start referring to the device by its codename: Ghost. Much like the Nexus 4 was mako, and the Nexus 7 was grouper. The Moto X Phone is codenamed Ghost.

Unfortunately, you can’t really see much of the actual phone, because it is wearing a black non-disclosure case that is hiding the phone itself, but we have confirmation that these pics are the real deal. However, our source says that the rear panel pictured is the device itself, and not the case. It is said to be made of polycarbonate, not metal or even Motorola’s traditional Kevlar. 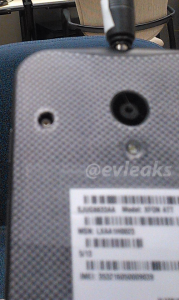 The phone matches certain details that we had heard before from our source, including the headphone jack centered on the top edge of the device, and the power and volume buttons both on the right edge of the device, like the Nexus 7. The label on the back of the device is a bit hard to read, but it does list the model of the device as “XFON ATT”. This is a pretty big deal because Motorola has always had very close ties with Verizon, and Google has never launched an official Nexus device through AT&T, although AT&T has supported the Nexus 4 and 7. Our source says that the X Phone has been confirmed for release on Verizon and AT&T, but it will support all major carriers.

Our source says that the M logo in the top left is a something that all prototype devices are branded with at Motorola, but it is unlikely to appear on the final device. We’re a bit disappointed in that, because so few companies in the mobile world have real logos. Apple is basically the only one, because everyone else – Samsung, Sony, HTC, Google, even LG – just use their own names as a “logo”. It’s nice to have the symbol sometimes.

And, even better news for you all: last time we heard from our source, it was for the disappointing news that the X Phone’s release had possibly slipped to August or later; but in fact, the device is still scheduled for release in early July, so we may not have to wait to see the real thing. When we do see it, it should be packing 32GB of storage, and 2GB of RAM. The prototype has a 720p screen, but the final version is planned to have 1080p. Our source can’t confirm the screen size, but said it looks to be around 4.7″.

It will be running close to stock Android with no MotoBlur, but will have a few Motorola customizations including in power management. And, as we confirmed before, it will come in a choice of over 20 colors.