Google Plus unveiled its new look today to its “170-Million +” users – This according to Google senior vice president Vic Gundotra. It’s in Google’s effort to improve the usability of their Social Network.

Google is currently racked No 2 in social networking platforms beating out Twitter and its own sibling YouTube. Google hopes the new improvement will give Google Plus that community feeling that Facebook has which lacked in the previous version of Google social network.

Although Google released its new look a day ahead of Facebook’s news feed release, but Facebook stays a head and continues to rules the social networking world with 1 billion active users monthly, with 7 billion registered users worldwide, it’s reported 65% of the world uses Facebook today, and 600 million users are now access Facebook via mobile device.

So what are the most noticeable improvement?

Left Menu: the Google + menu bar, a dynamic menu that allow you to navigate all Google Plus service, and allows you to remove or add your favorite services such as local businesses, products or music brands, companies, movies, and much more.

Built-in photo editor:  With an integration of Google’s web-based  Picasa photo editor, a neat tool which allows you to cleanup or crop a photo before you share it with friends and family.

Here are 2 screenshot of the new improved: 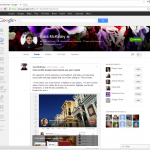 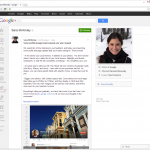 There are many new improvement, you will just have to see them yourself  @ https://plus.google.com