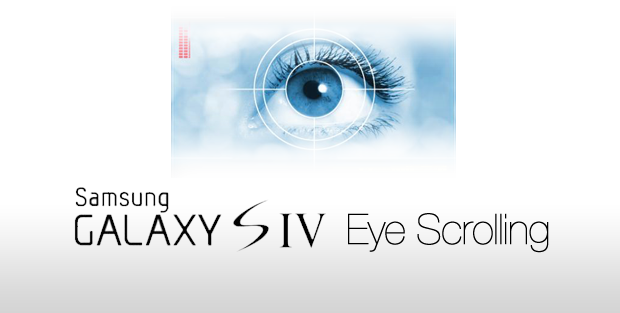 From point and click, to touch and tad, now “eye scroll”?  According to reports South Korean tech giant Samsung will flaunt a new innovative feature on its flagship smartphone Galaxy S4 next week here in New York City.

What’s an ‘Eye-Scroll’? –  An anonymous Samsung employee said that the feature will track the user’s eyes to determine where to scroll up or down. For example, if you’re reading an article or a book and your eyes reach the bottom of the page, it will automatically scroll down to reveal the next paragraphs of text.

Sounds futuristic, and your bit doubtful? Let’s give Samsung benefit of the doubt, in June 2012 Samsung released Galaxy S3 that introduced us to a feature called “SMART STAY” which tracks a user eyes and the screen maintains a bright lit display as long as you’re looking at it, dims automatically if you’re not glaring at it. Samsung might incorporate this technology on to their much rumored eye-scrolling feature.