The speedy Gulfstream G650 and Cessna Citation X might have to get out of the way of this one: A U.S. startup firm has launched a tandem, two-seat “luxury” jet called the Saker S-1 that it says would be the fastest private civilian airplane ever with a top speed of Mach 0.99.
Saker Aircraft says its design is inspired by

military fighter jets to appeal to buyers who want a personal jet capable of operating from short runways and flying high and fast in style. The S-1 is being designed to operate from runways as short as 1,500 feet and climb at 14,000 feet per minute to a service ceiling of 45,000 feet. Maximum range using a pair of Williams FJ44-4 turbofans and internal 500 gallon fuel tank is targeted at 1,390 nm. Two external 100-gallon tanks could increase range to nearly 2,000 nm, Saker says.
According to specifications released by the company this week, the Saker S-1 would have an empty weight of 5,500 pounds and be capable of carrying a maximum payload of 6,000 pounds. The S-1 would measure 40.5 feet long and 15 feet high and would have a wingspan of 27 feet. Normal cruise speed would be Mach 0.95, a few knots faster than the G650 or Citation X, the current fastest civil jets.
Despite its sleek looks, Saker says special training won’t be required to fly the S-1, which would be certified under Part 23 rules — although, the company points out, ejection seats will be offered as an option.
Saker’s already taking “pre-orders” for the jet, which is expected to sell in the neighborhood of $5 to $7 million when deliveries start in 2019.
The Saker is reminiscent of the ATG Javelin personal jet program of about 10 years ago, an airplane that never made it into production. A number of aviation experts have their doubts about whether this one can as well.Via FlyingMag 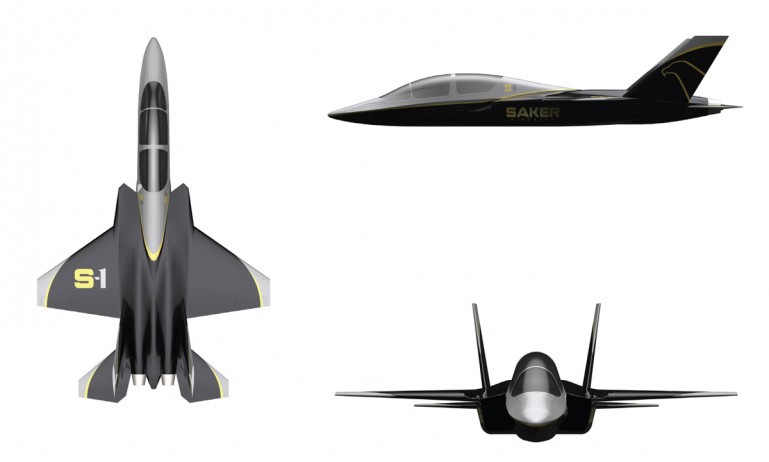